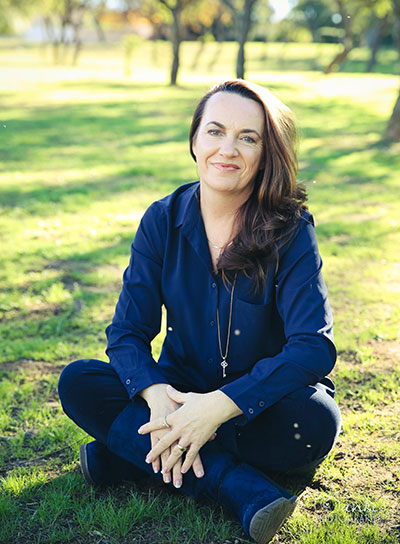 Joanne came to saving faith in Jesus Christ on 28th February 2002. It was an encounter she will never forget. The depression and suicidal thoughts that had crept into her life over time instantly lifted and an inexpressible joy filled her heart and mind that is beyond words. Her life was forever altered by the King of kings.

God was about to take Joanne on a journey she never thought possible, and in this journey, she has and is constantly discovering the wonder, beauty and goodness of a kind and loving God. In her learning to trust Him, He has and is fulfilling dreams that have been residing in her heart for as long as she can remember.

Joanne’s journey with God began at the age of 34 in Cape Town, South Africa where God revealed Himself to her in awesome and miraculous ways which convinced her that He is a God who is real and knows her on a very personal level.

Four years later, God moved her and her family to Dubai in the Middle East where she encountered the Gospel of grace and faith. It was from this period of time that everything changed in her ordinary Christian life. The revelation of her identity in Christ was a pivotal transforming factor that led to a new-found passion and fire for Jesus.

In January, 2009 the family relocated to Muscat, Oman – a city nestled between dry, rocky mountains. It was in this quaint, traditional Arab city that Joanne knew she was pregnant with ministry and a calling in God. It was after spending a year in prayer and seeking God that a ministry was born in their home early of 2010. It began by creating a place for believers in Jesus to gather together to worship Him, study His Word, discover their identity and purpose, encourage one another and thereby grow together as the Body of Christ – this in the midst of a Muslim nation. Never did Joanne ever imagine that it would become a place where so many people of many different cultures would come to saving faith in Christ, get water baptized and baptized in the Holy Spirit. The small house church became a bustling church of life and action which soon burst forth into a bigger venue. God opened the door for mission trips into Sri Lanka, Philippines and India as well as ministry into other nations.

Joanne personally witnessed how the Gospel of Grace impacted, transformed and empowered so many people’s lives and that is why she has become passionate about sharing this beautiful Gospel which truly is the “Good News of Jesus Christ”.

Joanne is a wife and mother, she is married to her teenage sweetheart, Simon, whom she met thirty – seven years ago. They have been blessed with two beautiful children, their son, Mathew and a daughter, Hannah.

Joanne is truly excited for the things to come!